Located in Grossmont Trolley Center where motorists are directed to park in the Pravada garage, which is spacious.

The good news is that they have a couple vegan entrees on the menu.  I got the vegan miso ramen.  I picked out the mushrooms and saved them for my dog.  The portion was big enough that I saved some for the next day.

The bad news is that the place is smelly when you go in because they’re making stuff out of eels. Ewwww! That’s why you’ll need a strong drink. I got the blue diamond martini.  (The online menu doesn’t list the drinks so now I have no idea if the alcohol was vegan friendly.)  To start I got a house salad with vinegar & oil (because their dressing isn’t vegan.)  The waitress tried to take the vinegar and oil before I was done using them, but luckily I stopped her because I saved the olive oil with the mushrooms for my dog. 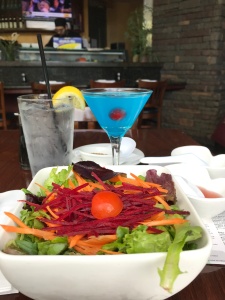 The crazy thing is this place is popular.  I went in for an early lunch and it was already busy.  A pair of innocent sailors sat by me, Clark (chick) and Zhao (dude).  I kept looking at them to see if they had a point of view, but they just didn’t.  After they were done with their non-vegan food, four fat nurses from Kaiser Permanente took their place.

Located in Grossmont Center near Macy’s.  I know I reviewed this one before, but I figured my further research required me to update.  Sadly, they haven’t updated their menu with vegan options. So, again I got the grilled zucchini tacos specially prepared to be vegan.  I got the carrot sticks as a side because none of the other sides were vegan (not even the beans!)  So, last time I got a salad which was purportedly vegan, but now it’s not.  Anyway, the salsa was too hot which caused me to eat the carrots fast like Bugs Bunny.  I also got the whiskey sour with Jameson again. However, my gift certificate had enough for me to order something else so I got a baked potato and a side of avocado.  I seasoned them with salt, pepper, and malt vinegar, which was really good and a better option than the grilled zucchini tacos, in my opinion!  They need to update their menu, however, to reflect a more evolved age.

Now I almost forgot to mention that a Facebook troll purports to reside in La Mesa.  This person is threatened by anti-natalists. I figure I should just copy and paste the definition of antinatalism so that anyone can see it’s nothing to feel insecure about!

From Wikipedia, the free encyclopedia

Antinatalism, or anti-natalism, is a philosophical position that assigns a negative value to birth. Antinatalists argue that people should refrain from procreation because it is immoral. In scholarly and in literary writings, various ethical foundations have been adduced for antinatalism.[1] Some of the earliest surviving formulations of the idea that it would be better not to have been born come from ancient Greece.[2] The term “antinatalism” is in opposition to the term “natalism” or “pro-natalism”, and was used probably for the first time as the name of the position by Théophile de Giraud (born 1968) in his book L’art de guillotiner les procréateurs: Manifeste anti-nataliste.[3]