Has a stranger ever approached you in the parking lot asking for “money for food”?  I usually just advise them to apply for food stamps, but now there’s an even better response:

Download the Veggie Grill Rewards app using my code and receive an $8 credit to spend at any Veggie Grill!

Some douche-bags wearing In-N-Out hats outside the Veggie Grill.

Generosity.  Unlike with food stamps, food bank distributions, and soup kitchens, the recipient will only get vegan food with this freebie, the most generous gift.  (A dead animal might be free, but you wouldn’t take it, right?)  Of course, beggars like FatCatSegat won’t appreciate it because they want money, but oh well, so does everyone’s creditors.  So do the Kardashians-Jenners-Wests. 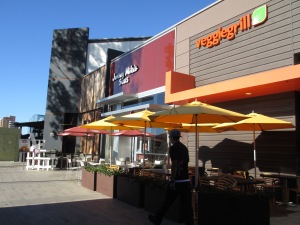 Hey, look at the Veggie Grill in La Jolla!

More vegan restaurants should do this kind of marketing, but the Veggie Grill is the first one I’ve noticed that does.  They e-mail out some decent coupons too!

Downloading the Veggie Grill Rewards app is a no-brainer.  But I’m not sure FatCatSegat has the brains sufficient to complete the task.